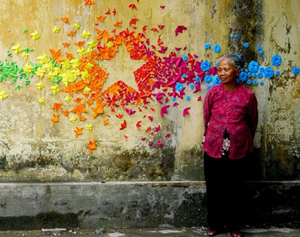 There are approximately 18 million APIAs in the U.S., representing nearly 6% of the total population and growing faster than any other racial group (!) Naturally there’s been a lot of hubbub in the press lately about our growing numbers, cultural influence, and potential to shape the political landscape. But how to turn this potential into real power? APIAs remain one of the most politically under-organized, under-engaged and under-represented constituencies; only 55% of Asian American citizens of voting age are registered to vote - the lowest rate of all races (shameful!).

18MR is an online community that promotes APIA civic engagement by leveraging the power of technology and social media. It’s a cultural and political hub, a place for ideas and community members to come together. Our goal is to build a broad coalition of partners: ranging from community-based organizations and print magazines to Asian American blogs and YouTube channels. Throughout the 2012 election cycle, 18MR will promote online voter registration tools, run social media-fueled civic engagement campaigns and contests, and provide up-to-date information and analysis on all things political that Asian (and all!) Americans should know about.

But building our collective power depends on you. Register to vote, sign a pledge to vote, and harass (nicely!) your friends to do the same. If you are connected to a blog, nonprofit or media outlet, become a campaign partner. Whatever you do (and whether or not you are eligible to vote), stay engaged in our online community.

Ultimately, 18MR is about you, your friends, your cousins, your aunties. It’s about making our voices heard…on Election Day, when a Sikh gurdwara is attacked, when an Asian American soldier or student is viciously bullied, when we’re misrepresented in the media or mainstream culture, when Jeremy Lin is called a “chink” (and when he registers his first triple double), and when one of our elected officials does us proud. 18MR is about us – all 18 million of us!

We can become a force to be reckoned with. It’s our movement: let’s build it. And let’s keep rising!

In solidarity and anticipation, Samala, Jenn, Cynthia and Cayden