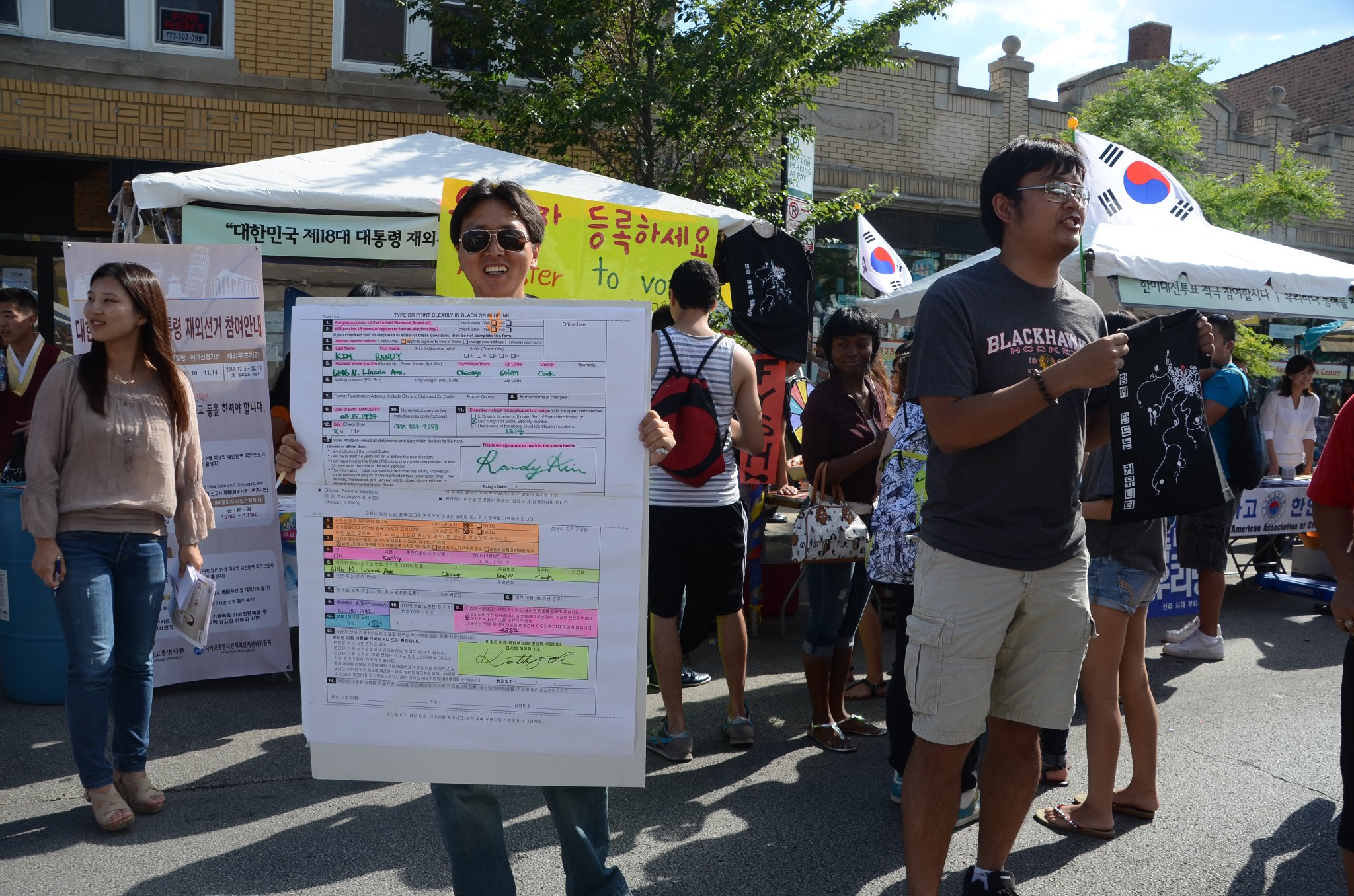 I began my full-time work with KRCC in Chicago as the new Immigrant Rights Organizer back in mid-July. Prior to my work with KRCC, I was in Busan, South Korea for three years, serving as an English teacher at an all-boys middle school, and as a volunteer leader for an expat group that serves communities in need -- such as women's shelters and orphanages.

I was the first one in my family born in the U.S., as both parents came to the States as refugees from Vietnam and Cambodia right after the war. Through my experiences living in Korea, and witnessing the struggles that my family endured as immigrants, it inspired me to personally get involved with advocating for Asian American rights in the Chicagoland area.

As I joined KRCC only a few months before the election, I had little experience with voter outreach. I quickly had to learn about Congressional races in our targeted districts, political candidates, the organizations and volunteers who are part of our collaborative voter outreach work, the voting process, and most importantly -- learning about the needs of our community.

I began to join my colleagues at Korean supermarkets and local events for our voter registration push. Honestly, we had our struggles getting Koreans and other Asian Americans registered. My initial attempts were met with indifference, especially among younger people. Reasons for not voting included not having sufficient knowledge of the candidates, difficulties with English, and the lack of attention from elected officials.

Despite the challenges we encountered, we successfully helped register hundreds of new voters in the Korean American community. I witnessed my colleagues trying out new ideas such as the college voter competition, where Asian American organizations from local universities competing with one another for new voters. My director Sik Son also went from interview to interview with local Korean and mainstream media to promote the election. We also connected with a group called KA VOICE, which helped us reach many of the Korean business and professional leaders in our area.

Our October 27th Early Voting Day event in the 8th, 9th, and 10th Congressional districts was also a slam dunk: nearly 800 Korean American voters came out, and local candidates showed up and interacted with our leaders. I interviewed the candidates about why the Korean American community is important to their campaign and they talked about the importance of Korean-owned small businesses and the opportunities to forge a stronger relationship with Korean Americans. To have the candidates meet with our community was a sign that the Asian American voice is finally being heard and taken more seriously.

In the final days leading up to election, KRCC staff and volunteers made thousands of phone calls to Korean American voters, mailed out hundreds of voting materials, and visited senior homes. We even brought a staff person from the Chicago Board of Elections to show our first-time voters how to use voting machines.

As a result of all these efforts, KRCC boosted our community's civic involvement around this year's election. And since the Asian American population for the 10th Congressional district is about 10%, and the 8th Congressional district is over 5%, our votes played a role in close Congressional races. Tammy Duckworth, the first Asian American Rep to be elected from Illinois, beat out incumbent Joe Walsh by 22,000 votes and a 55-45% margin for the 8th district. Democratic challenger Brad Schneider also beat out Robert Dold in an upset of about 2,000 votes (a 50.5-49% margin) for the 10th District.

In a matter of a few months, I went from being an electoral novice to a civic engagement maven -- connecting with local media and candidates, making endless phone calls to voters, and better understanding the issues facing Asian Americans that KRCC strives to address. Despite the long and sometimes grueling work that the election season requires of an immigrant-serving organization, I firmly believe that this is the kind of dedication that will bring more attention from elected officials -- and bring out the best in our community.

Randy Kim currently serves as the Immigrant Rights Organizer with KRCC in Chicago, and has been involved with promoting immigration rights, voter education and outreach, and other social issues affecting the Korean and immigrant communities in the Chicagoland area.