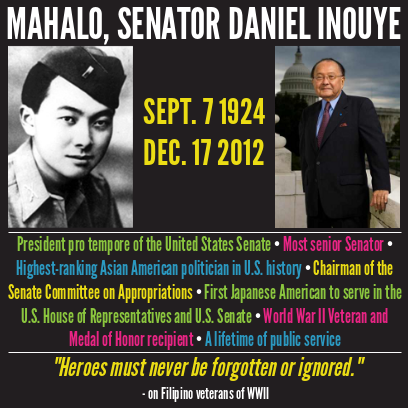 On Monday December 17, fearless leader, advocate, and WWII hero Senator Daniel K. Inouye passed away at the age of 88.

To say Maholo to Senator Inoouye and his family for his unwavering dedication and lifetime of service, 18MR gathered signatures on the following open letter. The letter, along with signatures and individual comments, was delivered to his family and staff.

You will be greatly missed. As the most senior member of the U.S. Senate and the highest-ranking Asian American politician in U.S. history, your legacy will always be remembered. Having represented Hawaii in the U.S. Congress since it achieved statehood in 1959 -- first as its U.S.Representative and then as its Senator -- you are truly an inspiration.

You were both the first Japanese American to serve in the U.S. House of Representatives and the first in the U.S. Senate. A fearless advocate, you never shied away from conflict: your bold conviction to speak out against the prejudice you experienced during World War II and your leadership to fight for justice for our Filipino WWII veterans is unparalleled. And it has been incredibly powerful to see your service recognized with the nation's highest award for military valor, the Medal of Honor.

We recently heard from your office that, when you were asked how you'd like to be remembered, you stated, "I represented the people of Hawaii and this nation honestly and to the best of my ability. I think I did OK."

We honor you, Senator Inouye. Mahalo for your public service and for being an amazing champion for Asian and Pacific Islanders across the United States. You did more than OK; you were great.