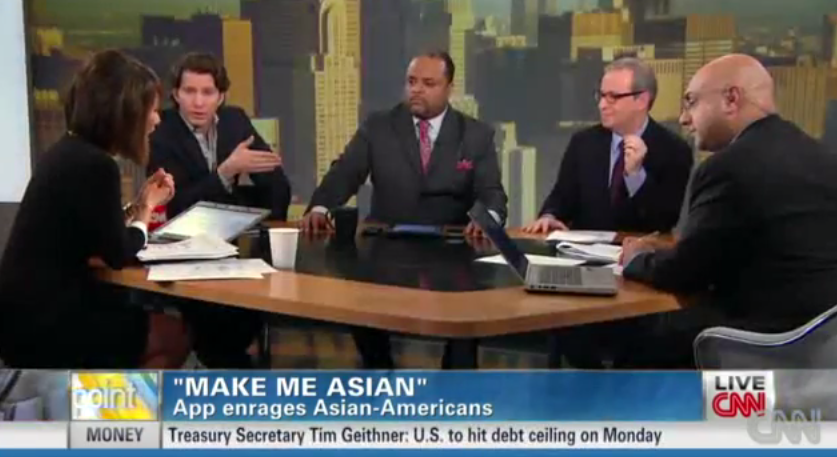 The “Make me Asian” app recently received tons of press coverage, including a segment on CNN’s Starting Point. A panel of commentators recently discussed the app – but did they miss the point?

Oh, here we go. Where to start with this CNN panel? In our opinion, the whole thing is kind of a hot mess:

Instead of debating the semantics of “offensive” vs. “racist” and rhetorical “what ifs” about how much one would need to change features and exploit stereotypes to truly insult a group of people – it would’ve been a much more productive conversation to give the ‘Make me Asian’ app historical context and explain why almost 10,000 people (the number who have thus far signed a petition) are outraged. Or to have more panelists who are, y’know – actually directly affected by racism towards Asians.

One of the most WTF moments was Roland Martin’s reference to Michael Jackson’s “Black or White” music video, which was totally random and pretty much sucks as a comparison. “Black or White” is basically a world tour dance party with a Kumbaya message of multicultural harmony. It also features a diverse montage of real people morphing into…other real people. Which is a far cry from the yellowface and racial caricatures that Google tries to pass off as a “fun app” that supposedly “makes you look Chinese, Japanese or Korean.”

To his credit, when asked if he felt the app was just “in bad taste”, Will Cain deferred to Alina Cho to give her perspective as an Asian American. To which she responded, “I find it offensive; I find it a bit racist”. Unfortunately, Ali Veshi decided to end the segment by declaring, “The last word is: Undecided!” – as if he gets to make the final call; and as if Alina’s word didn’t really matter.

So who gets to determine whether or not the ‘Make me Asian’ app is offensive to Asians? If this panel is any example, apparently it ain’t Asians.

If you’re frustrated by this app and this panel, sign our petition asking Google to take down the “Make me Asian” and “Make me Indian” apps – and send the message that this is not OK.