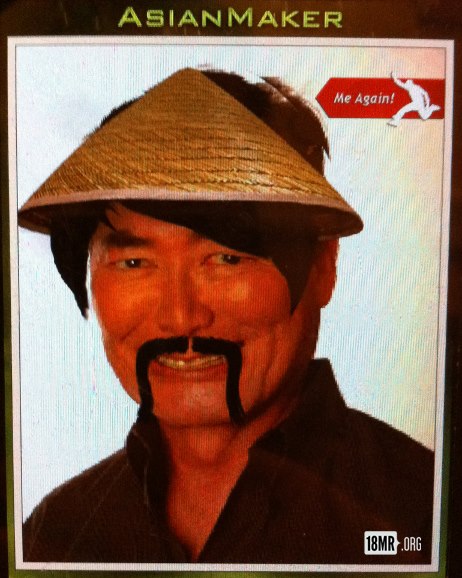 Despite national media attention and almost 10,000 total signatures on 18MR and Peter Chin’s petitions combined, Google has refused to remove the Make me Asian and Make me Indian apps from its Google Play store.

So what next? 18MR asks the question: what happens when you make Asians “Asian”? The community’s response to the racist Android apps Make Me Asian” and “Make Me Indian” (along with a host of other problematic apps) by developer Kimbery Deiss have gotten coverage on national news channels like CNN, Huffington Post and The Daily Beast.

Anchors and pundits have talked about the apps being offensive to Asian Americans and Native Americans, but often shy away from why.

So 18MR wondered: what happens when you make Asians “Asian”? In order to find out, we tried the app out ourselves. Here’s what we ended up with:

If you’re as creeped out as we are, we bet that George, Mindy, Aziz and Jeremy would be pretty creeped out, too. Check out even more ridiculous celebrity “Asianmakers” on our Facebook page.

If you think these pics and the “Make me Asian” app is all sorts of wrong, please share these celebrity images with them on Facebook/Twitter with the hastag #makemeracist and ask them to signal boost our petition to take down these racist apps (and stay tuned for efforts around “Make me Indian”).

If you need a nudge, you can lift this sample tweet (just remember to change the handle to whichever celebrity you’re tweeting at):

Thanks for all your work sharing this important issue with your family and friends!