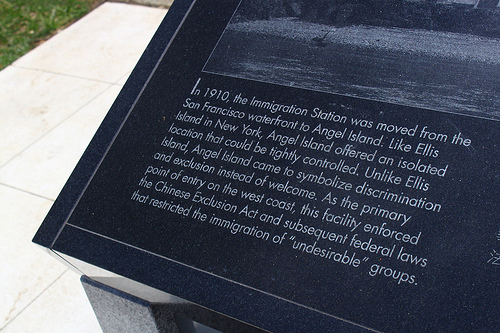 It’s been over two weeks since the Senatorial “Gang of 8” released their immigration principles that President Obama followed up with a supportive press conference and principles statement.

I find it an interesting coincidence that it was the same week as many in the Asian American community recognized and celebrated Fred Korematsu day – a reminder of America’s history of selective xenophobia and the dangers of exclusionary immigration practices. I do have to tip my hat to the Congressional Asian Pacific Americans Caucus for their fairly strong principles that were just released. I’d like to tackle some of my feelings about the Presidential and Gang of 8 proposals by their thematic elements.

Despite continued spending on militarization of our Southern border, and net migration from Mexico falling to zero, both the President and Gang of 8 call to expand this spending. What does this mean? More addictive border enforcement money for Southwestern states, more drones patrolling the border, and no real change to the militarized border that leads to hundreds of deaths every year.

Cracking Down on Employers

Making it harder for employees to make money to take care of themselves and their families will undoubtedly cause undue hardship for families across the country. The fallacies of these systems should be very concerning for Asian Americans. According to the Asian American Justice Center’s fact sheet on the problems of E-Verify “Record inaccuracies can stem from inconsistencies in entering name information. These types of errors are intensified when dealing with longer surnames, the use of multiple surnames and name order associated with foreign names.” Between the fact sheet and NAKASEC’s press release, I think the problems in focusing so much on this aspect should be apparent for our communities.

There is a punitive rhetoric attached to “earning citizenship” in both platforms. Placing people at the “back of the line” despite many of these same undocumented folks actually being somewhere in the bogged down application process sounds tough on immigrants and is damaging for families – especially without concrete plans to expedite the clearing of the backlog. Requiring English proficiency to attain a green card is a new and unique requirement which overlooks the challenges of learning a new language as populations age. Hammering on the question of tax payments overlooks the billions of dollars undocumented folks contribute already, let alone what the fine would look like for hard working immigrants trying to make a future for themselves and their families.

Sadly, the Senate plan ignores bi-national LGBTQ couples in their streamline. Both platforms intend to exempt DREAM Act eligible youth and those who would be covered under AgJobs from the punitive “back of the line” component. In a welcome sign toward businesses, advanced degree recipients in the fields of science, technology, engineering and mathematics (STEM) would have an expedited process towards residency as well. But there are problems. Does this plan increase the risk of a perpetual “underclass” of immigrants who don’t fit those three expedited categories and is it setting up a “good immigrant/bad immigrant” dichotomy – one that extends the model minority pressures of education (DREAM youth) while ignoring another large segment of undocuAPI and other undocumented workers (domestic workers)? Asian Americans have lived the damaging experience of the model minority, and we should be wary of new, divisive splits.

We have seen the impacts of anti-immigrant legislation since the late 1800’s. Our communities were the first to be targeted and, according to the Department of Homeland Security’s own statistics; our communities continue to be targeted. Five of the ten largest populations of undocumented folks are Asian immigrants – from China, the Philippines, India, Korea and Vietnam. Many of our families continue to wait in the backlogs of the immigration system – visa applications from October 1988 for Filipino brothers and sisters of US Citizens are now in process.

During the President’s speech on immigration last week, he brought up Angel Island in the same breath as Ellis Island. The comparison of these two, as if there were any equivalency, is mind boggling and glosses over the history of our communities. While Ellis Island is remembered as the welcome point for newly arrived immigrants (primarily from Europe) who had crossed the Atlantic, Angel Island holds a much more problematic place in history – one where the “welcome” awaiting Asian immigrants was one of detention and discrimination. The stories carved into those crowded barrack halls, the barbed wire, guard towers and disparate treatment of Asian immigrants upon that island continue to serve as a reminder of the discrimination people like us received in coming to America.

Guest Blogger Justin Valas is a third-generation Japanese American from Colorado and organizes alongside undocumented youth. He is very involved in Asian American issues and struggles with love alongside his UndocuAPI fam. He can usually be found venting via Twitter @thejval.