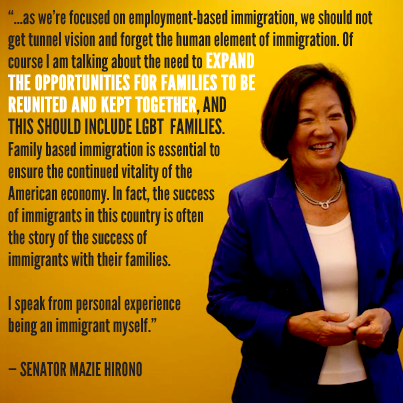 As Congress debates comprehensive immigration reform, the issue of family visas is now bubbling to the fore. One contentious issue is whether there should be a reduction in the number and types of family visas being granted. Some Senators have signaled an interest in eliminating family visas for siblings and adult children who are married.

The rationale for this change stems from a belief that family visas are less valuable to American society than employment-based visas. This move is a significant challenge to the current immigration framework and the values it embodies. In 1965, when the United States eliminated national-origin quotas and established the basis for current immigration law, President Lyndon Johnson noted in his signing ceremony, “This bill says simply that from this day forth those wishing to immigrate to America shall be admitted on the basis of their skills and their close relationship to those already here.” In that vision from 1965, skills and family unity were both seen as integral to the country’s “growth, to its strength, to its spirit.”

Today, however, family visas are increasingly being judged by the same economic rationales that underlie employment-based visas. Even so, the labor market evidence does not support the belief that family-based visas have little economic value.

Various articles indicate that differences between family and employment categories may exist only a few years after an immigrant’s arrival, and that there is convergence in earnings between skills- and family-based visas within five years of migration. Similarly, a more recent report indicates that those on family visas have improved outcomes after a brief period of adjustment following their entry to the United States.

In many of these studies, the authors surmise that help from family members enable those who come under family visas to quickly improve their labor market outcomes. This help can range from housing assistance to help with career networking, options that immigrants without family connections would not have. Finally, there is one other set of economic rationales for family-based visas that is more difficult to measure, which is the provision of child care and household assistance by immigrant relatives, which in turn allows for greater labor force participation among immigrants and US citizens.

As Congress debates changes to current immigration law, the values of family-based immigration – emotional, social, and economic – need to be adequately understood before making any wholesale changes.

Guest Blogger Karthick Ramakrishnan is associate professor of political science at the University of California, Riverside. His research focuses on civic participation, immigration policy, and the politics of race, ethnicity, and immigration in the United States. Ramakrishnan directs the National Asian American Survey and is writing a book on the rise of state and local legislation on immigration over the past decade.

This post originally appeared on the blog of the Immigration Research Group. It has been modified slightly for 18MR.org_