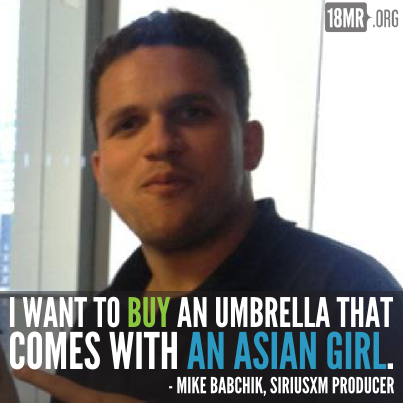 Mike Babchik’s side project, the internet show/public access program Man Banter, went to New York Comic Con in mid-October with a camera crew to shoot segments for the program, interviewing con goers. Those interviews turned out to be repulsively violating interactions with women cosplayers, like Comic Con presenter and 18MR member Diana M. Pho. We’re gonna cut to the chase. This is sexual and racial harassment. It’s disgusting.

A big mistake was handing out professional business cards for his job at SiriusXM NFL Radio, with the Man Banter YouTube account hand-written on the back.

Though Man Banter representatives emailed Diana to try and tell her they and Babchik have no affiliation with SiriusXM, we were suspicious. It wouldn’t be hard to fake a business card, but this business card also had Sirius’s pre-merger information on it (Sirius and XM Satellite Radio merged in 2008). Was it possible Babchik was just using an old business card? We wanted to check in on that.

Of course, it didn’t take us long to track down some evidence that Babchik does in fact work at Sirius, just not for NFL Radio. Seems that he’s moved up in the job title area. He works as a producer and on-air personality for Mad Dog Sports Radio, instead.

In addition to Tweets from Mad Dog Sports Radio’s account, we also found Soundcloud segments featuring Babchik on air as recently as late September. There’s pretty clear evidence that Babchik is, in fact, a SiriusXM employee. He’s just trying to cover his tracks.

And that’s how we got to where we are now: calling for SiriusXM to fire Babchik for his unethical, disgusting behavior. While we’ve received some fantastic support from the Comic Con community–the overwhelming majority of whom want to keep their convention safe and accessible to everyone–SiriusXM have been less than cooperative. We’ve also been getting pushback from, ostensibly, Babchik himself. Our original Facebook post was reported as harassment (yes, the irony is not lost on us) and we were banned from Facebook for a day.

When we returned, we tried to post to SiriusXM’s page asking them why they’re not doing anything about Mike Babchik. The 18MR members who did so had their comments deleted, even though SiriusXM answers almost every other inquiry they receive via Facebook.

We still want SiriusXM to fire Babchik, because his behavior is absolutely beyond the pale. Misrepresenting yourself to gain access to Comic Con, harassing attendees, and then trying to backtrack is completely unacceptable. SiriusXM needs to know about his antics and take appropriate action. Help us tell Sirius this is unacceptable.