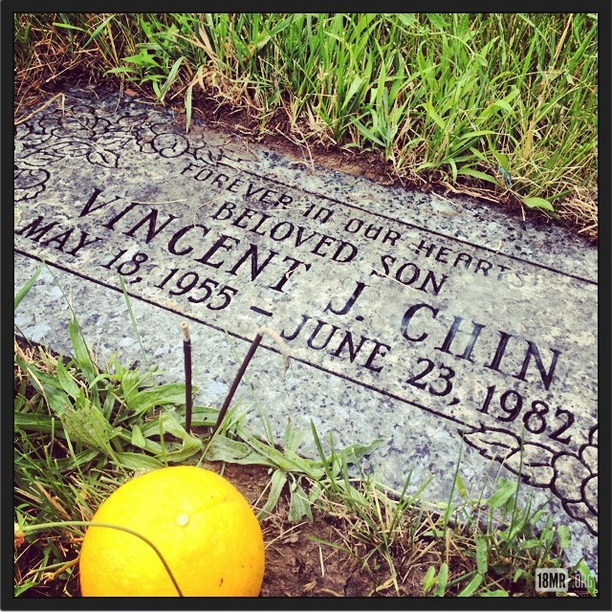 Vincent Chin has been on my mind a lot lately. It’s not just because he passed away 32 years ago Monday, or that I’m the same age now that he was when he was murdered. It’s not just that we both have deep ties to the Detroit area, and that ever since I heard his story I wondered what he and his family thought and felt about race here. It’s not that I was born just five years after he was killed, to a Chinese father and a white mother, the daughter of auto workers. It’s not even that Detroit News columnist Neal Rubin wrote a revisionist editorial not two months before the anniversary of Chin’s death this year.

It’s that, in remembering the movement for justice for Vincent Chin, and in the wake of a rash of attacks on Asian Americans over the past months, I keep hearing a common refrain: charge it as a hate crime. Vincent Chin’s killers never served prison time, nor did they pay any of the civil reparations awarded to the Chin family. Usually, we hear that the failure to convict Ronald Ebens and Michael Nitz is evidence of the need for hate crimes—and mandatory minimum sentencing—laws.

Relying on these laws presumes we can trust the state’s capacity to be the arbiter of justice, and we want to empower the state to punish people who have committed heinous acts on our behalf. But why would that be? Judge Charles Kaufman famously said that Ebens and Nitz “weren’t the kind of men you send to jail,” even for murder. It’s safe to say that the state, and its agents, were not invested in making good on its own standard of justice. The failure is evidence that we need an alternative to trusting the state to deliver justice on our behalf.

The only tool the state has to respond to violence is violence, whether it’s the death penalty or incarceration. Either way, the state’s “justice” rips individuals out of their communities. Especially in black communities, it means as many as one in three men will spend time behind bars. This is systemic violence; violence writ large, enacted on our behalf by the state. I’ve been thinking about Vincent Chin because we need to come up with a better response to violence than to repeat and amplify that violence in the name of justice.

This is precisely why I argued that my organization not campaign on the case of Wen Hui Ruan, who was killed in Manhattan in May, because the request the family made after the suspect was arraigned was to charge the suspect with a hate crime. Sending a 20-year-old black man to prison, potentially for life, only tears apart another family—with no guarantee that he’ll change from or confront the incident which landed him there. This is a tough moment, but I want to hold the truth both of the pain of Ruan’s family and the struggle of the young suspect’s mother. And I want us to take a long, hard look at why we want to send that young man to prison.

Murders are, for me, a kind of limit case. As a prison abolitionist, I don’t want to see any more people incarcerated. On the other hand, it can be hard to grapple with our limited options to address this kind of personal loss, and the criminal justice system seems to offer a clear pathway to resolve the problem and achieve closure. Yet many of the measures rolled out in the name of our safety, such as militarized police forces, increased surveillance online and on the street, and rules for punishment that create minimum mandatory prison sentences or harsher sentences for hate crimes, don’t do much to make us safer.

What should be more frightening is the way that hate crimes laws, in particular, perpetuate the cycle of violence while closing the dialogue on what justice might actually look like. They rest on the assumption that more brutal crimes warrant harsher sentences, and that the longer the prison sentence, the more the perpetrator has “done his time.” Even as the state—through prisons, policing, and surveillance—proves time and time again that it puts us and our communities at risk, we are frequently called to advocate on its behalf.

However, the effects of advocating for the criminal justice system do more than increase the pressure under which we are policed, which has an adverse effect on members of our communities who are undocumented, who are queer, who are transgender, who are sex workers, who are gang members, or who are addicted to drugs. In many cases, these groups may overlap, especially in cases like Khosal Khiev’s, documented in the award-winning film Cambodian Son.

Crucially, it also wedges us apart from other communities of color with whom we would otherwise find common cause. I don’t want to suggest that we should care about ending the War on Drugs just because “our kids” get hurt in the line of fire when militarized police raid houses. I want to suggest that hate crimes, police violence, indefinite detention, and deportation should instead ground us more deeply to struggle, in solidarity, with other communities of color. While we grapple with the effects racist policy and neoliberal attitudes have on our communities, we must be thoughtful about the way that these compound and amplify in communities which have different historical experiences of marginalization—and on whose backs we often stand. They should be a call to all of us to make critical interventions in the cycle of violence not just for our communities, but in them.

And that’s why I’ve been thinking about Vincent Chin a lot. While his attackers were white, they were also working class men whose outlooks were undoubtedly colored by their own struggles with global capitalism. The response to their own increasing marginalization was to take it out—violently—on another human being.

That’s not justice. It did nothing to change the conditions of injustice in Ronald Ebens and Michael Nitz’s lives. And, the more I think about justice, the more I am sure the justice I want looks less and less like the justice on offer, which would only pull Ebens and Nitz out of their communities and put them in prison. The alternatives aren’t easy, but they’re worth fighting for. The kind of transformative work we need might seem like a pipe dream, but the only way to stop this cycle of violence is to intervene with all the creativity, passion, and humanity we’ve got.

I went to Chin’s grave on Monday, the 32nd anniversary of his death. I cleaned it, clearing some of the grass and weeds that overhung his headstone, and left a fruit and incense offering for both him and his parents. I talked to him for a little while. The next day, I had dinner with my white mom, and I asked her if she and my Chinese dad ever talked about the murder.

“No,” she said. “I think I brought it up once, but your dad never wanted to talk about it.”

That startled me. My dad is about ten years Chin’s senior, but as a young Chinese American man starting a family in the Detroit area, I’d assumed he would have talked about it, especially with my mom. I would have thought they’d talk about it because they were planning to have kids—who would be half Chinese, who they planned to raise in the Detroit area. But they never said more than a few sentences about it.

I worry that not talking about it—any of it, from the simple recounting of what happened to raising greater questions about what kind of justice we want to see—is exactly what the state needs to increase its ability to police, incarcerate, and surveil our communities. I believe the way we build a world without prisons is by building strong, loving, accountable communities. And to get there, we need to start talking.

Here is how I hope we honor the legacy of Vincent Chin: organize, organize, organize. His case, and the cases of countless other Asian Americans & Pacific Islanders throughout the history of the United States, show that we simply cannot depend on the state to deliver justice. It’s time to get real about that, and what it means for the organizing we do. It is time to understand our relationship to state violence, not just interpersonal violence, and take the lead on hard questions about who we are accountable to and how. Justice, and transformation—not simply retribution—can start with us, if we choose to lead.