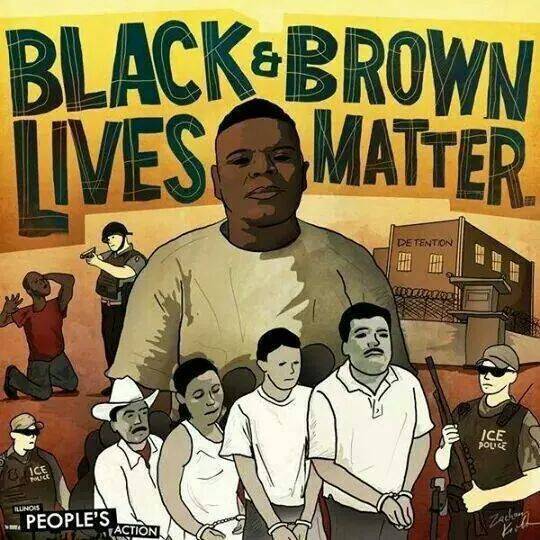 As a national network of queer South Asians, it’s been a rough week. We witnessed a huge victory and an utter disappointment in President Obama’s announcement of administrative relief around immigration. As a community of immigrants and the descendants of immigrants, these decisions impact us. We celebrate those of us whose lives will be immeasurably improved by deferred action and temporary protection from deportation, and we mourn with those who will continue to face the daily fears and indignities of being seen as “illegal” simply because they lack papers. We celebrate improvements to DACA and our visa system, while waiting to find out how LGBT families will be affected by this ruling.

We also mourn the failure of our American justice system to indict Darren Wilson. We watched, enraged, as yet another murder of a young unarmed Black man went unanswered. We watched as news networks immediately focused on the ‘violence’ of protesters who demanded Black life be valued, instead of focusing on the failure of our ‘justice system’ to condemn state-sanctioned violence. We stand with Mike Brown, and Ferguson, and we understand that while we will never experience the degree of violence that Black people are subject to every day, our struggles are deeply connected.

Although we are also people of color in the U.S., our South Asian experiences of state violence vary greatly. As race, class and the model minority myth intertwine, many of us cannot understand the deep-seated fear of police shared by so many communities of color. And yet, depending on our access to wealth, immigration status, perceived religion, gender presentation, skin color, and more–many of us also experience state violence and police brutality regularly. We are stopped and frisked, beaten and bloodied, by the police. We continue to be surveilled, apprehended and deported, dealing with the onslaught of overt and covert Islamophobic attacks in a post-9/11 world. We fear for the safety and lives of our brothers, and our siblings, especially those who look darker, bearded and threatening. We fear that they too may be disappeared, beaten, taken. We know that their only crime is their perceived proximity to “terror” and to Blackness. Racism against us as South Asians does not exist in a vacuum; the racism we experience builds on long-standing systems of anti-Black racism and Islamophobia in the U.S. We know that our own liberation is inextricably bound to the struggle for Black lives and immigrant lives to matter in this country.

As queer and trans* people, especially of color, we face violence sanctioned by the state, by police, and by ICE. Queer people, trans* people, and especially transwomen are disproportionately sentenced to solitary confinement, and solitary detention, for no crime other than our sexuality or gender. As queer people, we also face different forms of intimate violence, too often sanctioned by our families, our communities, and those we love. Despite the rhetoric of family unification so prevalent in the immigrant rights’ movement, many of us, though not all of us, understand family as an intimate site of contestation. Many of us are used to having difficult conversations with those closest to us, coming out endlessly about our sexualities, our genders, our politics, and more. As queer people, we know that violence comes in many forms, and that our families, given and chosen, are also sites of struggle.

In light of these recent events, we re-commit ourselves to bringing the revolution home. We re-commit ourselves to talking about Ferguson with those closest to us. We pledge to combat the anti-Black and anti-immigrant sentiments that run rampant in so many queer and South Asian spaces at the most basic level–interpersonal, one by one, within our families, however we define them. We promise to do the inter-community work that only we can do. As we paint signs, show up to rallies, raise our collective voices and stand in solidarity–we also commit to doing the work in the spaces where it’s often hardest, in the many places we call home.

As queer South Asian organizers, activists, brothers, sisters, siblings, friends, and more, we stand with immigrants, with Black communities, with communities of color, and with the people of Ferguson. Black lives matter. Immigrant lives matter. We demand that our “nation of laws” recognize us all as human, as whole people deserving of respect and dignity. We stand together until none of us are left behind.

We’ll meet you at home, and we’ll see you in the streets.

This article reprinted with permission from QSANN.