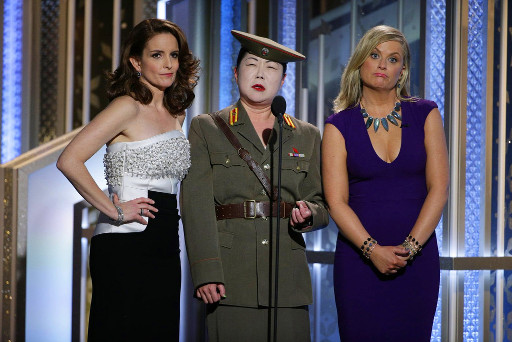 I have 30 minutes to write this before my sixteen month old daughter will need me by her side.

This morning, I woke up hoping that some other Asian American will have written a response to what transpired yesterday to Asian Americans everywhere during the Golden Globes. I have not read anything beyond a few Facebook postings: despair is like the extreme cold of Minnesota, it keeps everyone huddled inside, close to family and friends—the people who offer warmth and respite from the frigid temperatures beyond our doors.

Last night, I turned on the television to watch the Golden Globes. It was a walk down memory lane. When I was younger, my older sister Dawb and I used to watch the Golden Globes together. We didn’t get to go to the movies because our parents couldn’t afford it but we wanted to know how to talk about certain films with our friends at school. It felt like a magical world far away from the government subsidized houses we and our extended Hmong family knew as America. It was men in tailored suits and women in elaborate dresses. It was jewels glittering, red lips smiling, white teeth gleaming. It was “dreams coming true.” Dawb and I watched side by side, weeping at the moments when the winners thanked their families, reflected on their long journeys, and graced the world with their bits of wisdom. I thought it would be fun to watch the Golden Globes last night, my little girl at my side, share some of what life could look like if one’s dreams came true. I didn’t expect to see an Asian American on stage.

Amy Poehler and Tina Fey were on either side of her. Margaret Cho was in the middle. Amy Poehler had on a beautiful blue evening gown. Tina Fey wore an elegant black and white dress. Margaret Cho had on an army uniform. Amy Poehler’s hair was parted to one side and Tina’s was parted to the other, clean and shiny. Margaret’s hair was pulled back into a severe bun. She wore an army cap. She had thick white powder on her face and incredibly red lips. She opened her mouth, streams of words, barely recognizable as English came forth in a thick, heavy caricature of an Asian American accent (never mind that there are many different varieties). Amy Poehler and Tina Fey smiled and talked with their clean, natural American English, their carefully lined eyes and mouths, oohing and aahing while Margaret Cho frowned in the middle, her words coming forth like cries from inside.

My daughter pointed to the television set. She was fascinated by Margaret Cho. Maybe she recognized someone that looked a little like her mother? Maybe she recognized someone that sounded a little like her mother when my Hmong accent grew thick? My daughter turned to me. She pointed back at the television. She said, “Meemao”…monster.

After Margaret Cho marched across the stage as Amy Poehler and Tina Fey took the “proper” stairs, I turned off the television.

It was a joke. A reference to The Interview and North Korea. It was the only Asian American presence with a bit of camera time during the Golden Globes. It was a caricature and mis-representation of all that we are in this country, and yet it was a statement of how great comedians like Amy Poehler and Tina Fey and long standing traditions of American cinema thought/think of Asian Americans in this country: we are invisible unless we could be made fun of for white laughter and amusement. What they do to us: show our sons and our daughters the “meemao” in our skin and in our accents.

The damage is done.

My daughter needs me. I can hear her call from the thick walls that separate us, “Mommy, the meemao, the meemao.”

Guest Blogger Kao Kalia Yang is a Hmong American writer from Minneapolis, Minnesota. Yang is a graduate of Carleton College and Columbia University.