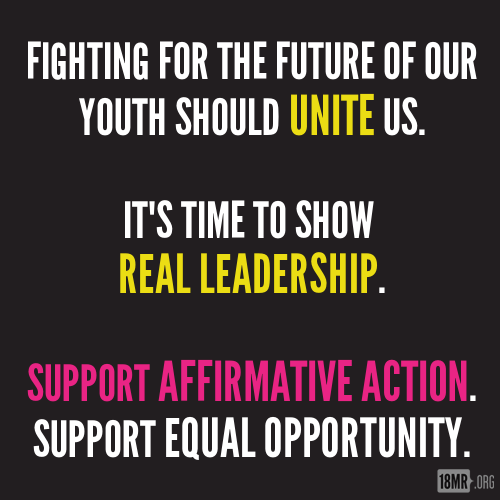 As individuals and organizations across the United States that serve and represent Asian American, Native Hawaiian and Pacific Islander (AANHPI) communities, we believe that equal opportunity is a cherished principle in American society that must be protected. Our universities should reflect our diverse democracy and expand opportunities for those students who have overcome significant barriers. Rather than letting ourselves be divided, we must come together to ensure increased opportunities and success for all students.

Affirmative action does not constitute quotas

Unfortunately, there have been attempts by some to engage in divisive wedge politics by using misguided, misleading tactics to attack equal opportunity by calling for an end to race sensitive admissions policies at educational institutions such as Harvard University and University of North Carolina at Chapel Hill. Opponents of affirmative action have wrongfully and disingenuously equated affirmative action with quotas.

The truth is that affirmative action does not constitute quotas.

To be clear, we oppose quotas, discrimination, and bias against any racial or ethnic group.

We support affirmative action which, as noted above, does not constitute quotas, discrimination, or bias against Asian Americans.

Currently, affirmative action at universities consists of race sensitive holistic admissions policies. These policies promote equal opportunity in a society where racism still exists and racial barriers continue to unfairly limit educational opportunities for students of color. For example, our schools are more segregated today than they were in the late 1960s. Students of color, particularly African Americans, Latinos, Native Americans, Pacific Islanders, and Southeast Asians, are much more likely to attend under-resourced K-12 schools. Implicit bias and stereotyping also further impact and harm the educational learning environments and opportunities of students of color. Universities should consider these factors when reviewing applications for admissions.

All students benefit from the racially and ethnically diverse learning environments fostered by race sensitive holistic admissions processes, including the benefits of increased cross-racial understanding, reduction of stereotyping and isolation of minority students, and training for a diverse workforce and society.

Affirmative action simply takes into account whether an applicant has overcome significant obstacles and institutional barriers, such as racial and ethnic discrimination

Moreover, in the context of college admissions, “merit” cannot be quantified by grade point average, SAT scores, or number of activities alone. Instead, life experiences such as overcoming racial and ethnic adversity are critical factors in a student’s leadership and potential contribution to the university and to our society. In addition, numbers, like grade point averages and standardized test scores, are not colorblind and often reflect and magnify K-12 educational inequities.

Affirmative action policies help to level the playing field and promote diverse university learning environments that are essential in our multiracial and multicultural society. Our democracy benefits from a diverse and educated populace and workforce.

Those who are truly committed to equal educational opportunity should demonstrate real leadership and reinvest in higher education throughout the nation to expand access, affordability, equity, and student success. Decades of disinvestment in higher education across the country have made college less accessible for all students, especially students of color. We call for unity in standing up for the future of our youth and realizing the promise of equal opportunity for all in the United States.