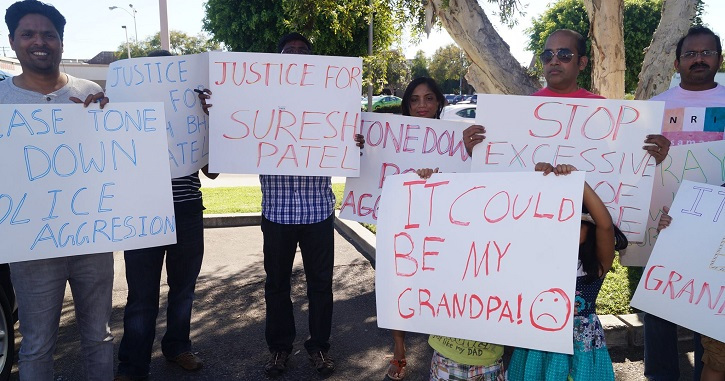 “Do you worry about your son?”

I asked my mother that question almost two years ago, after Mike Brown’s murder. In the long, heavy pause that followed I felt her fear and confusion, palpable yet still hesitant, echo over the phone. My mother’s fear was entangled in the throes of U.S. racial logic. My little brother will often be privileged enough to be safe, read as an upper-middle class South Asian. Yet he is also dark-skinned enough to be seen as a threat. In a country where systems of policing, violence and fear are built on anti-Black racism, dark skin is a reason to be afraid. Like my mother, I worry about a day when my brother’s privilege will not be enough to protect him.

Did my mother believe that my brother’s darker skin could leave him vulnerable to violence? Did she see how Black liberation was tied to our own?

I want to put forth an idea of “selfish solidarity.” We are living in a movement moment, and a serious commitment to collective liberation demands that we dig deeper than the white savior model of “allyship.” Our solidarity should be selfish without becoming self-centered: it should speak deeply to our own self interests, where we are organizing for our own survival too, without taking over the mic. The urgency of #BlackLivesMatter necessitates a real practice of “selfish solidarity ” where we build rooted commitments in the movement as non-Black South Asians and people of color – based in our own lived experiences, not in academic theory or rhetoric. “Selfish solidarity” means actually reaching for the truth that, as Alicia Garza wrote, “when Black people get free, everybody gets free.”

The need for a deep and selfish solidarity of South Asians with #BlackLivesMatter became nationally visible last year. Sureshbhai Patel, an Indian man visiting America to care for his grandson, was mistaken for “a skinny Black man” by a neighbor who called the cops. When the cops could not communicate with him, because Mr. Patel does not speak English, one officer brutally slammed Mr. Patel into the ground, leaving him partially paralyzed. The police were called on Mr. Patel because he was mistaken for “a skinny Black man;” he was brutalized, beaten to the point of literal paralysis but not killed, because he was understood to be Indian and immigrant.

This isn’t an invitation to flatten our experiences, and claim that Black and brown experiences of police brutality are comparable. Nor is this an invitation to take the stage from Black voices, or to co-opt movement momentum to gain wins that benefit non-Black South Asians but leave Black people behind. The statistics around Black death are staggering; non-Black South Asians are not experiencing genocide in the U.S. Despite being brutalized, Mr. Patel was not killed, like so many Black people in their encounters with police – his identity as a non-Black Indian immigrant led to his survival. Moreover, due to the power of the Indian embassy, the officer who attacked him was indicted. Our solidarity cannot ignore these stark differences.

And yet, last month, Mr. Patel’s case was thrown out. When his case was tried in court, in a dynamic Black people are intimately familiar with, Mr. Patel was put on trial – not the cop who brutalized him. The defense attorney claimed that “when you come to the U.S. we expect you to follow our laws and speak our language…Mr. Patel bears as much responsibility for this as anyone.” The judge claimed that the prosecution did not “eliminate reasonable doubt that [the cop] was guilty of a crime.” Even the relative privilege of being brown, not Black; having the power of a foreign embassy behind him, not the U.S. government; was not enough for Mr. Patel to remain safe, nor to be spared the indignity of being blamed for his own brutalization. Our experiences of state violence are not the same, but they are connected – and our liberations are too.

In many ways, Mr. Patel reminds me of my darker-skinned immigrant grandfather. Though he studied English literature in school, he had trouble understanding and communicating with American accents, including my own. He was far less vulnerable than Mr. Patel, and yet his vulnerability informs my own fear, anger, and commitment to collective liberation.

Especially for darker-skinned South Asians, working class people, non-upper caste desis, Muslims and those easily “mistaken for Muslim” – these connections are deeply personal. Many of us have experienced fear, profiling and violence – at the airport, by police, in our schools, at our places of worship. The oppressions that we experience are interconnected: the almost mundane “extra pat-down” at the airport; “stop and frisk” policies that criminalize Black bodies; the paralysis of an Indian grandfather; the murder of Mike Brown. This needs to be the crux of “South Asians for Black Lives;” these experiences should inform the hashtags of #APIs4BlackLives and #ModelMinorityMutiny. We cannot undo the systems of policing that target our bodies without fighting state violence that is built on Black bodies and Black pain. Practicing “selfish solidarity” demands that we understand how fighting for Black liberation has the power to transform our own daily lives, and that standing with the Movement for Black Lives is also standing for our own freedom.

In #APIs4BlackLives spaces, solidarity is often framed as combatting histories of anti-Blackness and recognizing our relative privilege. Though Black freedom struggles lay the foundation for the immigration laws that allowed Asians into this country, Asian Americans benefit from the anti-Black logic of the model minority myth every day – certain Asians are cast as good, hard working immigrants and used as a foil to Black people, cast as lazy and incompetent. As we witnessed this past weekend, with Chinese and Asian Americans rallying around Peter Liang, the cop who killed Akai Gurley, this is too often where our analysis stops. We often talk about our relative privilege without also building deep and personal investments in Black liberation. We need to bring Southeast Asian, South Asian and Pacific Islander stories and experiences into the center of our organizing. We need to work with our people towards an understanding of “selfish solidarity” – one that inspires us to to wield model minority status as a weapon against white supremacy, not against Blackness.

Especially for those of us who use our class privilege to shield us from violence, we do have a real choice: we can choose to ride out the ways that we benefit from white supremacy and from the racial logic of the model minority myth, and call our conditional sense of security enough. We can choose to be half-free, participating in anti-Black racism and pretending that Mr. Patel does not remind us of our own grandfathers. Or we can build our communities’ understanding of and investment in Black liberation. We can decide to use our relative privilege to work for our own true liberation, where we don’t fear for our grandfathers, our brothers, and ourselves.

Building “selfish solidarity” is not easy, but we do have models for moving forward. DRUM: Desis Rising Up and Moving in New York has been building mass movements of working-class South Asian people in deep solidarity with other people of color for 15 years. They are laying the groundwork for our collective liberation from white supremacy; those of us who have believed that class privilege and model minority status will protect us need to learn from their work and get on board. Organizations like East Coast Solidarity Summer, Bay Area Solidarity Summer, and Chicago Desi Youth Rising have been working with South Asian youth to sharpen our communities’ political analysis around organizing, race, and struggle. We need to continue building the capacity of our communities to make these connections.

We can no longer afford to only have these discussions amongst self-proclaimed organizers and activists. Conversations about our shared investments, “selfish solidarity,” and commitment to struggle need to be happening in our community spaces, at our places of worship, around our dinner tables, in our homes. As a few of my South Asian siblings in struggle have pointed out, the goal of our work is developing deep love, building family in and with Black communities and across communities of color. “Selfish solidarity” isn’t a destination – it’s an entry point. “Selfish solidarity” is a tool for shifting momentum away from defending Peter Liang, from debating whether Mike Brown lunged for Darren Wilson’s gun, from claiming that Sureshbhai Patel was brutalized by one bad cop; and moving instead towards building South Asian, Asian, and people of color family and movements fighting for Black liberation. The idea of a solidarity that’s “selfish” might be uncomfortable, and perhaps it should be – as Bernice Johnson Reagan said, you “shouldn’t look for comfort” in coalition work. Coalition isn’t home. We should always be questioning our own work, asking if we are supporting Black-led organizing in ways that are meaningful.

I’m writing this piece from my own experiences, as an upper-middle class Lankan committed to the project of organizing my people for liberation. I’m not claiming to have answers; not pretending that this framework is new; not claiming that these ideas are always useful in the vast diversity of South Asian spaces that exist in this country. I am writing this piece, talking about cultivating a practice of “selfish solidarity,” because this is what I do know: my mother would never call herself an activist or an organizer. She wouldn’t call herself an “ally.” If I’m going to convince my mom to come to a #BlackLivesMatter march with me, to bring her resources to grassroots Black-led organizing, I need to frame this moment “selfishly,” and work with her to find our own stake in this work. If she is going to support #BlackLivesMatter organizing, her support will stem from fear for her family, from imagining her own child’s broken body in the street. A lens of “selfish solidarity” demands that we understand a basic truth: we will either get free together or not at all.

Here’s to getting free.

This post originally posted at To Speak A Song.