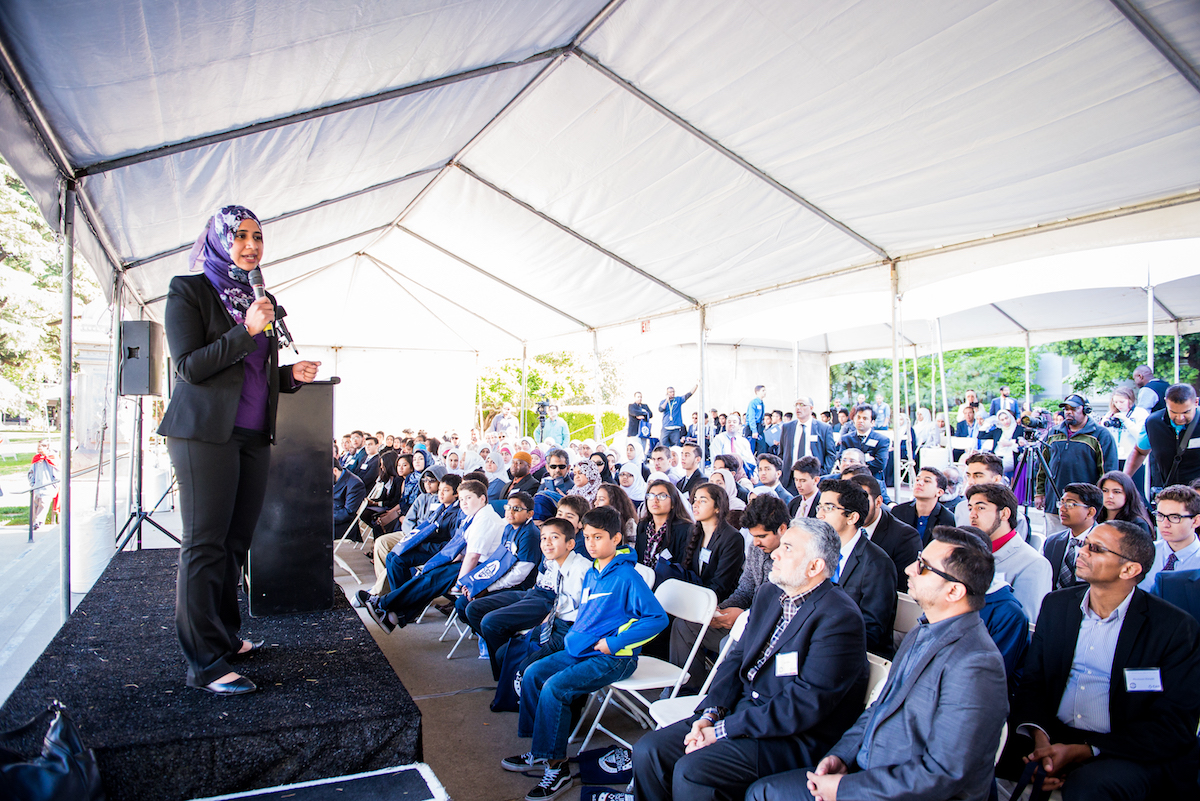 Image: Zahra Billoo welcomes over 600 California Muslims to the Capitol earlier this year, where they gathered to advocate for several key legislative priorities including the Safe Place to Learn Act.

As a proud Californian, I am encouraged by California’s leadership in supporting American Muslim communities and students. August has officially been recognized by the state of California as Muslim Awareness month, and the state legislature is on the verge of passing groundbreaking legislation that supports Muslim American students facing bullying.

I know from personal experience that such leadership is critical. I was raised in Southern California, and my brother and I were the only visible Muslim students in our K-12 schools. We were expected to serve as a resource for our friends and teachers, and every year we had to answer new questions about prayers and other accommodations. When I was in 5th grade, another student ripped off my hijab. Our school was supportive, but there were few available resources for teachers or students to better understand Islam and support Muslim students. It turns out my experience is not particularly unique. A report released last year by the Council on American-Islamic Relations California (CAIR-CA) finds that 55% of the American Muslim students surveyed reported being subjected to some form of bullying based on their religious identity.

The heightened Islamophobia of the past 18 months has created a more virulent environment than I have ever experienced.

As an American Muslim, I am used to facing a lack of awareness about my religion as well as some animosity. However, the heightened Islamophobia of the past 18 months has created a more virulent environment than I have ever experienced. From the targeting of mosques to rampant violence against Muslims or those perceived to be Muslims, the public antagonism has created a frightening and often unsafe climate for Muslim Americans. Too often, that antagonism manifests in the classroom and the schoolyard, turning what should be spaces of community and learning into ones that connote fear, isolation, and even the threat of violence for young Muslim Americans.

So amidst this hostility, I am grateful to witness the tremendous leadership of California policymakers. Earlier this month, California legislators passed a resolution sponsored by Assemblymember Bill Quirk to celebrate August as Muslim Awareness month. Local governments such as San Jose, which also designated August as Muslim Appreciation month, followed suit. Such shows of support by our government leaders for Muslim American communities are critical, both as a way to confront anti-Muslim bias as well as an opportunity to highlight the contributions of California’s Muslim communities.

Our state is also leading the way through support for AB 2845, known as the Safe Place to Learn Act, which would provide crucial resources to certificated staff at local education agencies to better serve students who are subject to discrimination and bullying based on actual or perceived religious affiliation. The bill additionally requires the Superintendent of Public Instruction to post anti-bullying resources related to affiliation or perceived affiliation with any religious group on its website. This bill is critical to Muslim communities, as well as other religious minority communities such as Sikh Americans, who often face bullying at school. AB 2845 passed quickly through the Assembly and now moves on to the Senate floor. During Committee hearings, many Muslim and Sikh students came forward to share the harassment they had experienced by fellow students. The moving stories brought tears to the eyes of many legislators and audience members.

California has the opportunity to stand out as an example of how to respect and protect all of its residents, regardless of religious affiliation.

AB 2845, which is authored by Assemblymember Das Williams and co-sponsored by CAIR-CA, Asian Americans Advancing Justice-California, the Sikh Coalition, and the Sikh American Legal Defense & Education Fund will soon reach Governor Brown’s desk. We urge the Governor to sign this critical bill to support Muslim American and other religious minority students.

Regardless of who wins in November’s presidential election, it is clear that the damage of inflammatory, irresponsible Islamophobic rhetoric has already been done. Amidst this volatile climate, California has the opportunity to stand out as an example of how to respect and protect all of its residents, regardless of religious affiliation.

Zahra Billoo is the Executive Director at the Council for American-Islamic Relations, San Francisco Chapter.