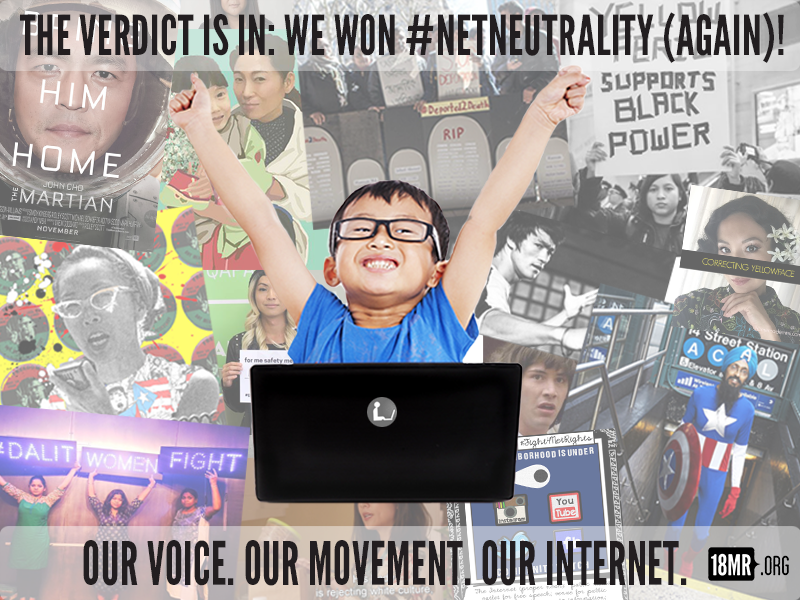 Of the 225 million Americans eligible to head to the polls in November will be some 9 million Asian Americans. It’s a segment of the electorate that’s hard to categorize.

Asian American voters are both courted and overlooked. We’re diverse in our political views and yet increasingly vote Democratic. Made up of over 50 ethnic groups, and speaking 100 different languages, “Asian America” is a sticky, nebulous concept that sometimes exists more in theory than in daily lived experience, which means there’s no single issue that Asian Americans will rally behind come November. But there is one issue that ought to unite all Asian Americans. We should all be coming together to fight to preserve the one space in which “Asian America” feels less like a concept and more like a living, breathing, thriving community: the open internet.

We know the power of the internet as an engine of economic innovation and growth, and as a means of communication, information access and education for all Americans. But for Asian Americans and other communities historically excluded from mainstream avenues of political and cultural engagement, the internet has taken on a special role. It’s the one place where many of us feel at home, whether on YouTube, where Asian American talent thrives outside of the white gaze of Hollywood and network TV; on Twitter, where we build community, awareness and political power with hashtag conversations like #NotYourAsianSidekick and #Asians4BlackLives; or through the variety of in-language news sources that help us connect with what’s happening in our countries of origin.

For Asian Americans and other communities historically excluded from mainstream avenues of political and cultural engagement, the internet has taken on a special role.

But the internet we know, love, and rely on is under attack.

Internet service providers are consolidating their market shares through mergers like the Charter-Time Warner Cable deal that threaten competition and our already limited consumer choices. Net Neutrality principles that mean that all information on the web is treated equally are being thwarted by zero-rating programs that give companies the ability to choose winners and losers online. Big Cable lobbyists and their allies in Congress are trying to crack down on new policies that would make it easier to stream video content on your television — policies that could expand opportunities for Asian American creators to reach new and broader audiences. Lifeline modernization, a necessity for Asian Americans who are low-income and/or limited English proficient, is facing vehement opposition in Congress. Meanwhile, anti-encryption measures threaten our ability to communicate, consume and organize in private.

It’s up to us to make the internet a place where Asian Americans — and all Americans — can reap the full benefits of the digital age. An open, affordable and accessible internet means students across the country can do their homework, unemployed people can search for jobs and benefits, and elders in our communities can access news and entertainment in their language of choice. It also gives us the opportunity to develop tools to make our democracy more representative, like with 18MillinRising.org’s crowd-sourced ballot-translation app VoterVOX that’s currently in development.

It’s up to us to make the internet a place where Asian Americans — and all Americans — can reap the full benefits of the digital age.

We’ve seen the power we have when we come together to defend the open internet. It’s how we won Net Neutrality in 2015, a victory that was upheld by a federal appeals court decision just last month. As November inches closer, we must call on our elected leaders and candidates to develop sound internet policies that build on these victories by ensuring affordable access to the global digital community, strengthening our privacy rights online, and limiting the ability of internet service providers to pick winners and losers online.

Mark Tseng Putterman is the media justice campaigner at 18MillionRising.org.

This piece was originally posted on Internet2016.net.