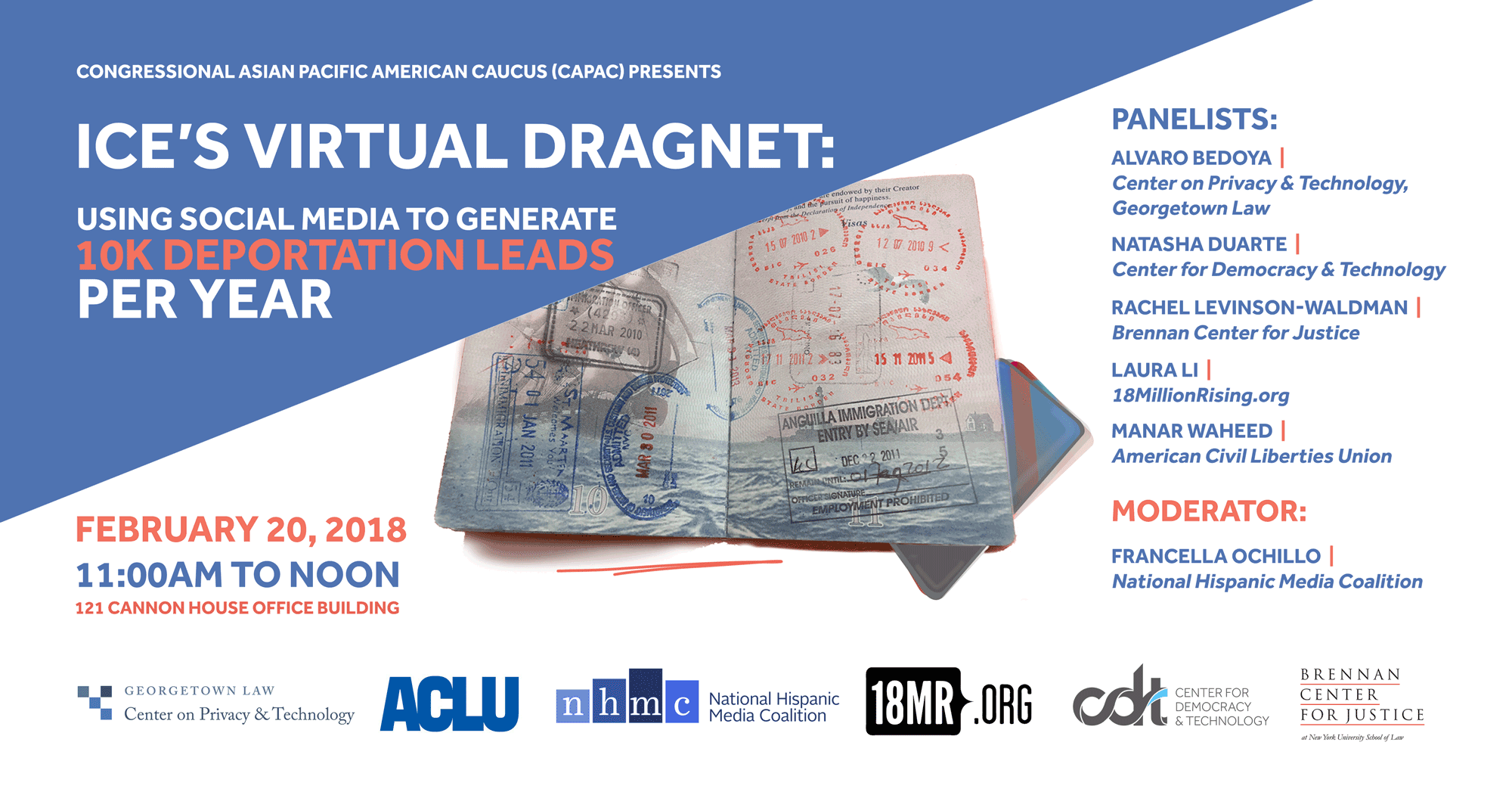 ICE’s proposed “Extreme Vetting Initiative” (EVI) aims to use automated machine learning and social media monitoring to vet visa applicants, generate leads for deportation, and continuously monitor people within the U.S. A coalition letter sent by 56 civil rights and civil liberties organizations opposing EVI to DHS Secretary Elaine Duke explained exactly how ineffective and discriminatory it will be. The goal of the Extreme Vetting Initiative is to “develop processes that determine and evaluate an applicant’s probability of becoming a positively contributing member of society as well as their ability to contribute to national interests,” using analytic capabilities including machine learning.

Under the U.S. immigration system, individual visa applicants have the burden of demonstrating why they should be granted a visa. People of color, including Asian Americans and Muslim Americans, who may be naturalized citizens or long term visa holders, have to continuously demonstrate our allegiance and perform our assimilation to the U.S. We do this so that when we are inevitably subjected to surveillance, we’ve established our loyalty and “good immigrant” standing.

ICE has plans to hire a third party contractor to design algorithms that will continuously trawl through the social media accounts of everyone inside the country. Their program aims to evaluate whether an individual will become “a positively contributing member of society” or whether they “intend to commit criminal or terrorist attacks” – language lifted directly from the president’s Muslim Ban executive orders. This Extreme Vetting Initiative is tailor made for discrimination, and given our country’s history in doing just that, we need to make sure that this program never gets off the ground.

On President’s Day this year, we marked the 76th anniversary of Executive Order 9066, which was signed by Roosevelt to forcibly remove over 120,000 Americans of Japanese descent to incarceration sites during WWII. This is an explicit example of how the government used its discretion to decide someone’s “ability to contribute to national interests” and because of wartime hysteria and racism, they decided Japanese Americans as a whole failed to do so.

Japanese American communities were also long surveilled before being forcibly removed to prison camps. They were treated as the enemy despite citizenship or green card standing. Similar to the implications of social media monitoring, Japanese Americans were also subjected to ideological monitoring based on criteria of whether they’d “contribute to American society”.

We’re seeing how global politics and war are yet again affecting how the U.S. views Asian Americans – as perpetual foreigners, enemies and spies. Economic and military anxieties about China and East Asia’s rise to prominence is fueling paranoia among U.S. officials that trade secrets will be leaked to foreign governments. Asian Americans are the most likely to be charged with crimes of economic espionage than any other group. Research conducted by Andrew Kim of South Texas College of Law shows that in cases between 1997 and 2015, 62% of defendants charged since 2009 have been of Asian descent, with the number of those with Chinese heritage tripling during the same time.

FBI Director Chris Wray told Congress during the recent Senate Intelligence Committee’s annual open hearing that Chinese students in the United States may be covertly gathering intelligence for their government back home. This automatically casts suspicion on all international students, professors, and academics, and jeopardizes scientific exchange. Wray’s comments aren’t surprising in the slightest: we’ve been witnessing an assault on Asian American scientists and researchers for years.

Take the example of Professor Xiaoxing Xi. In 2015, Professor Xi, a distinguished Temple University physics professor and world renowned expert that has published over 300 research papers and holds 3 patents, was wrongfully investigated by the F.B.I as a spy for the Chinese government. Under orders from a federal surveillance court, F.B.I agents with guns drawn stormed his house in the middle of the night, arrested Dr. Xi on fraud charges and rounded up his family at gunpoint. Dr. Xi’s was reputation ruined. He was stripped of his title as the Chair of the Physics Department and his current research group was reduced to a tiny fraction of what he used to have. More terrifyingly, Dr. Xi was also threatened with up to 80 years in prison and a fine of up to $1 million.

But there was no evidence that he engaged in any wrongdoing. Months later the Justice Department abruptly dropped the charges when it became obvious F.B.I agents and prosecutors misunderstood the technology they accused Dr. Xi of illegally sending to China.

Through Section 702 of the “USA Liberty Act” the government was able to spy on Dr. Xi and gain access to his emails, social media accounts, and documents without a warrant. Because they were in Chinese, FBI agents were unable to interpret both the content and context. Natasha Duarte, a Policy Analyst with the Center for Democracy and Technology said, “most of the tools used to automatically analyze text only work in English.” She said, “even Google, who has the arguably the best machine translation services, has said that government officials should not rely on these translations when they’re making decisions that affect people’s lives and livelihoods.”

After the case was dismissed, Dr. Xi said he and his family are constantly afraid that “everything we’re doing, the F.B.I. is listening and some of the things we say or do may be twisted. That fear is in the back of our mind all the time.”

Geofeedia, a piece of technology that monitored Twitter, Facebook and other social media platforms, was used by the Boston Police Department to monitor Black and Muslim Americans. It collected vast amounts of information from political beliefs to religious activities and personal conversations unrelated to criminal activity. It tagged anyone who spoke out against law enforcement or used words like “Ferguson” or “police brutality.”

In the three years of its use from 2014-2016, it did not solve a single crime and did not result in a single arrest. What it did do was trawl through social media accounts and generate alerts when it encountered “trigger words” like “ummah”— which roughly translates to “community” in Arabic — and “Muslim Lives Matter.” The Islamophobic bias in the algorithm meant that religious services and charitable activities, like a Muslims Against Hunger fundraiser, were spied on, and the act of being Muslim was criminalized.

While it was supposedly a crime fighting and terrorism prevention tool, it was essentially online stop and frisk. Yet the only reason Geofeedia is no longer used by the police is because Facebook, Twitter and Instagram banned it from their platforms.

The government monitoring our online activity to determine whether someone gets admission into or deported from the U.S. will incite fear and lead to self-censorship among visa applicants, U.S. citizens, and green card holders alike. People will avoid speaking to family members and friends abroad, especially those in countries already targeted by the administration through any iteration of the Muslim Ban. People may avoid posting critiques of the current administration or its policies for fear that they will be flagged as a threat.

ICE’s use of social media monitoring will only serve to chill free speech while targeting people of color, naturalized citizens, and long term visa holders. We know that ICE will inevitably share this information with other agencies and more people will be caught in the dragnet. Congress needs to take action and press DHS to end the program before it’s deployed.

If you were unable to attend the ICE’s Virtual Dragnet: Using Social Media to Generate 10K Deportation Leads Per Year briefing, you can catch a recording of the entirety here.

Laura Li is a Campaigner of 18MillionRising.org