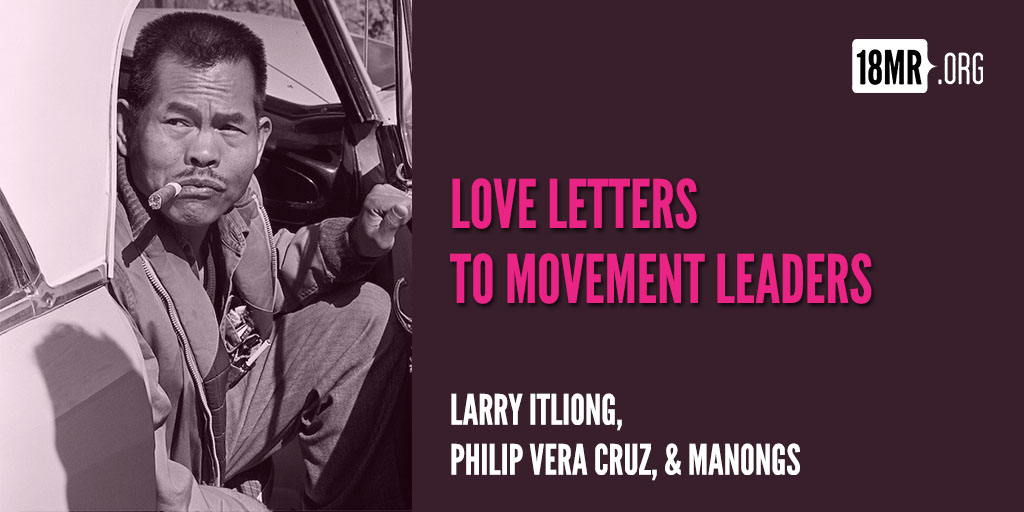 Today we remember and honor your struggle and leadership for farm workers and for the labor movement. Today is also Cesar Chávez’s birthday. And in celebrating his birthday, we celebrate all of you because we recognize that his legacy was made possible largely in part by the Filipino manongs of the Agricultural Workers Organizing Committee (AWOC).

Asian America has been experiencing amnesia of our political past. Our history has been erased and misremembered in school textbooks so that we do not challenge the status quo or dare to fight for our rights. Too many of us never learned of the sacrifices and accomplishments you all made by walking off the grape fields in the Central Valley.

It was because of your organizing that the famous Delano Grape Strike of 1965 was set in motion. When the manongs of Delano, CA didn’t see the negotiated pay raise in their salary, you all went on strike on September 8, 1965. An unprecedented 1,500 manongs walked off the fields.

You all realized that multiracial solidarity would be needed to overcome the growers. It was AWOC that approached Dolores Huerta, Cesar Chávez, and the National Farm Workers Association to go on strike together. Though it took years and a national boycott to resolve the strike, the first union contracts were signed on July 29,1970. Those who had stayed on strike lost their homes and most of their possessions, but demonstrated true solidarity. Philip Vera Cruz said it best, “the cause is always above a single personality.”

We at 18MillionRising.org and Filipino Advocates for Justice too strive to fight for our Asian American community, uphold our values, and demonstrate to our co-conspirators that we will be there for them in genuine solidarity. You all have shown us the power in standing together against those who wish to keep us oppressed.

So, thank you. This love letter is for all of the manongs who have worked in the grape fields. Thank you so much for being our movement leaders and for being the ancestors who have laid the foundation for our work.

This Love Letters to Movement Leaders series is a part of a collection of love letters that will be released throughout 2018.