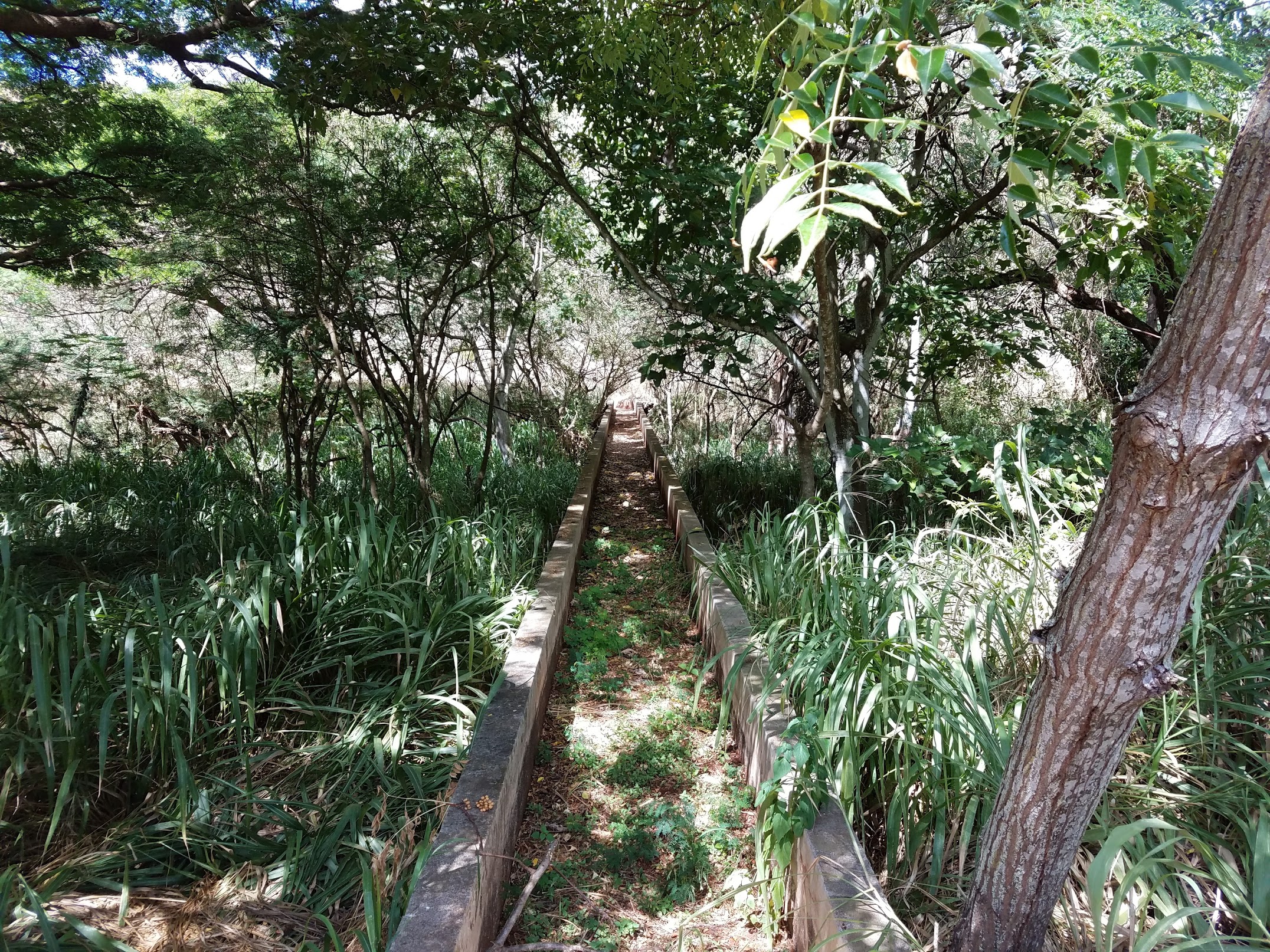 As we walked through the dusty red dirt surrounded by tall dry grass with the sun bearing down on us, I was astounded and how quickly the environment had changed. Just moments before, we were surrounded by swaying palm trees and were spritzed by delicious salty waves crashing on volcanic rocks. We were in Hawaii, after all. It had just rained, a short tropical summer storm before we had left Diamondhead Point, common in most parts of Oahu. But after an hour drive inland, suddenly we were hiking down this ravine with the most drastic desert microclimate I had ever seen – a place that the internees referred to it as jigoku dani: Hell Valley. It was August, and it looked like rain hadn’t touched this part of the island in months. I wondered how on this tropical paradise island were they able to find such a terrible location to detain Americans. And I wondered, as I was stepping into the echoes of Japanese American past, if I was also stepping into the echoes of my Muslim American future.

Unlike the Pearl Harbor Memorial with its epic concrete tribute, there wasn’t much memorialized at Honouluili. It is currently inaccessible to the public, and it just was because of my art residency at the Shangri-La Center for Islamic Arts and Cultures that we are able to gain access to this historical site. After the camp closed in the 1940s a local rancher had purchased the property and grew the adjacent sugar cane fields. The camp had been forgotten until local activists found it in 2002. The site was designated a National Monument by Presidential Proclamation in 2015.

Escorted by a National Park Rangers with rifles slung over their shoulders, we hiked for 20 minutes down the steep, red dusty path till it leveled off in a hidden valley. The park ranger would tell us the hidden aspect of the valley was intentional – it contributed to feelings of isolation and prevented airplanes from seeing it from overhead.

As we walked along the paved path that bordered one side of the camp, I was surprised by how signs of it had disappeared. I visited the Manzanar incarceration camp in central California just a couple months before, which had been transformed into an interactive memorial. But here, there wasn’t much. The trees grew tall and invasive grass grew lush. A small creek cut through the valley – we could hear the bubbling of the water flowing. The buildings were gone except for the outline of their foundations in the dirt. I found and walked along a gray stone aqueduct about 3 feet wide, cutting across the valley. It had been put in place to bring water to the sugar fields.

As a Muslim American living in these times, it was hard not to trace my life onto this past. My father had come to America from Bangladesh soon after the 1965 Immigration Act – he went on to get his electrical engineering degree and to work on the civic infrastructure that makes America: river dams, nuclear plants, and desalination facilities. Before my Muslim American narrative, there were others, too – of the African slaves brought over to work in the plantations, about 25% were originally Muslims.

In the late 1880s in Hawaii, Japanese laborers were brought over to complete America’s colonization of the islands. They built the aqueducts and irrigation ditches to bring water to the sugar cane fields and support plantation life. Japanese Americans made up a significant portion of the population in Hawaii by the 1920s. But in 1924, the Japanese were banned from immigrating anywhere in the United States. In fact all kinds of people – Arabs, South Asians, and Asians – were banned from immigrating to America due to the Johnson-Reed Act. In many ways, today’s 2018 Muslim Ban is nothing new, it’s simply history repeating itself.

The United States has always imported laborers for colonialism, imperialism and profits, and cut off the flow of people just as swiftly. The civil rights of these “othered” people have always been in flux, and always weighed down by white supremacy. I imagine the bitter irony the Honouluili internees must have felt seeing this gray stone aqueduct, built by their people’s own hands, as the most significant landmark in the camp, and the one structure that remains standing to this day.

In Hawaii, there were too many Japanese Americans to put all 150,000 people in the incarceration camps – it was impractical. Local organizing efforts by community members fought against it. Instead, when President Roosevelt signed Executive Order 9066 on February 19, 1942, the compromise strategy was to round up community leaders, like teachers and priests, and lock them in various prisons on Oahu or Sand Island, or send them to camps on the mainland. The camp in Honouluili Gulch was opened in March 1943. From 1943 to 1946, the 160 acre camp held 400 internees and 4,000 prisoners of war.

How easy it is for Presidents to create Executive Orders. The case against the current President’s Executive Order 13780, “Protecting the Nation from Foreign Terrorist Entry into the United States,” otherwise known as the Muslim Ban, will argued before the Supreme Court on April 25, 2018. The order restricts travel from certain seven Muslim-majority countries and, despite the pending Supreme Court hearing, it is in current implementation. Thousands of people turned out to protest at airports when it was first introduced, not many kept up with its implementation. Standing in that gulch, surrounded by the remnants of the Honouluili incarceration camp, it was hard not to draw parallels to being Muslim in America.

Our group walked through what was left of the camp. In that valley, banyan trees with hanging roots had cracked through the concrete foundations of long-gone buildings. We were shaded by the tall leafy trees, and the ground crunched underfoot with dry leaves. We couldn’t see deeply into the forest for the errant sugar cane stalks that had grown tall everywhere. We could hear tropical birds sing. The park ranger pointed out where the mess hall had once been – wood steps led down to a wide slab of concrete – where families would come visit internees once a month. It is now the spot where current Japanese Americans in Oahu perform ceremonies of remembrance. There had once been a garden in that direction. There were the living quarters over there. Over there was a fence that friends passed gifts through.

After the Muslim Ban was released, people kept talking about how we won’t let history repeat itself. It’s hard to believe it when this part of American history has been easily buried. It would be easy to use the same tactics on new communities, as long as the history remains that way. The modern version may not look like incarceration camps – but we the travel bans, holding cells at borders, deportation, and detention look very familiar. As the government takes bids for walls at the border, the Transportation Security Administration is detaining Muslims in secret rooms at airports. We have seen a rise in anti-Muslim hate crimes – from bombing of mosques to stabbings of brown people. Under this administration we have seen a rise in right wing extremism, as these terrorists are emboldened by the rhetoric of our leaders.

Many of the same things happened in the 1940s – the loyalty of Japanese Americans was questioned and the fear-mongering led to profiling, violence, and imprisonment. Inciting fear is a known political tactic – ever since September 11, the months leading up to elections have seen an uptick in anti-Muslim hate crimes, often incited by candidates running for office. It is not limited to candidates either – Republican officials in 49 states have attacked Muslims with words and proposed legislation since 2015. The Islamophobic fear industrial complex is systematic. The current Muslim Ban is a piece of the puzzle to intensify fear-mongering about Muslims in American culture.

As we hiked back up the dusty red clay ravine to our vehicles, I wondered who about the people who had taken the same footsteps in this dirt. How did they manage their fear, how did they find joy? Were they able to return to a life of pride or were they filled with self-hate and tried to distance themselves from their identity? Did they feel a stigma when they returned to life after war? What lessons must I take from their experience, transpose onto mine? I wonder what solidarity looked like for them and what they would say about the deep solidarity built between the Japanese & Muslim American communities now.

As the Supreme Court listens to the oral arguments this week, we can only hope that they hear the voices of America’s past to course correct for the future. Let the footstep echoes of the past end here.

Give as little as $5 a month to fuel our movement-building work.