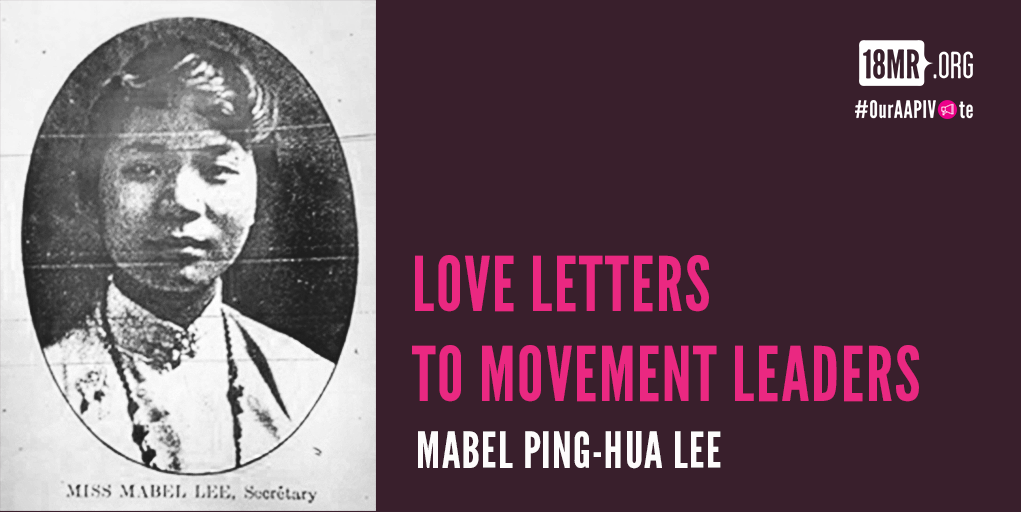 Your fight for women’s suffrage at the turn of the 20th century embodied what Grace Lee Boggs taught us decades later, that we are the leaders we have been looking for.

At 16, you were organizing for New York’s suffrage movement. When New York City suffragists held a parade in 1912 where 10,000 people marched to advocate for women’s voting rights, you were at the front of it. You bucked societal expectations for Chinese women. Instead of staying at home, you hit the streets.

In 1917, the state of New York finally approved women’s suffrage after rejecting it just two years prior. The majority of those votes came from New York City where you helped organize a major campaign to reach male voters. That same year, you led a contingent of Chinese and Chinese American women in a pro-suffrage parade because you understood the need for both direct action and participation in the voting process.

Yet despite all these wins and the ratification of the 19th amendment, which gave women the right to vote in 1920, you still could not cast a vote. Because of the Chinese Exclusion Act of 1882, Chinese folks in the U.S. would be barred from becoming citizens until the Immigration and Nationality Act was passed in 1952, seventy years later.1

Racism and patriarchy worked in tandem to prevent you and other women of color from becoming full citizens and voting for decades. Yet, despite not being able to exercise your rights under the 19th amendment, you and other Chinese American suffragists still decided to advocate for women’s voting rights. You write, “We all believe in the idea of democracy; woman suffrage or the feminist movement is the application of democracy to women.”2

As a woman of color, you also knew that becoming a citizen was not the be-all end-all for you. You were a trailblazer, attending Barnard College at the turn of the 20th century and later receiving your Phd in Economics from Columbia University – the first Chinese woman to do so. You poured yourself into your community and under your leadership, First Chinese Baptist Church in Manhattan’s Chinatown offered Chinese New Yorkers access to English classes, health services, and a kindergarten. It still remains a fixture in the community today.3

Right now the fight for democracy continues. Our right to vote is being restricted by a white nationalist agenda focused on limiting the power of communities of color. We are seeing a surge of Voter ID laws specifically targeting Black and Brown folks, intentional purging of the voter rolls leading up to Election Day, and our people intimidated from going to the polls.

Yet our communities are fighting back, just like our ancestors have for centuries. We are organizing and we are voting. We are already seeing higher voter turnout during this midterm season than in 2014. We may be on track to have the highest voter turnout since 1914. There are a record number of women and Asian Americans running this year. Like you, we are building a future that includes us.

We don’t know if you voted in the U.S. because you passed away in 1966, but this year we’re voting in memory of you. And of course, we are continuing the work past Election Day because we’re fighting for more than just participation in the voting process – we’re fighting for the right of our communities to thrive.

Thank you for being an ancestor and movement leader who helped lay the foundations of our work.

This Love Letters to Movement Leaders series is a part of a collection of love letters that will be released throughout 2018.