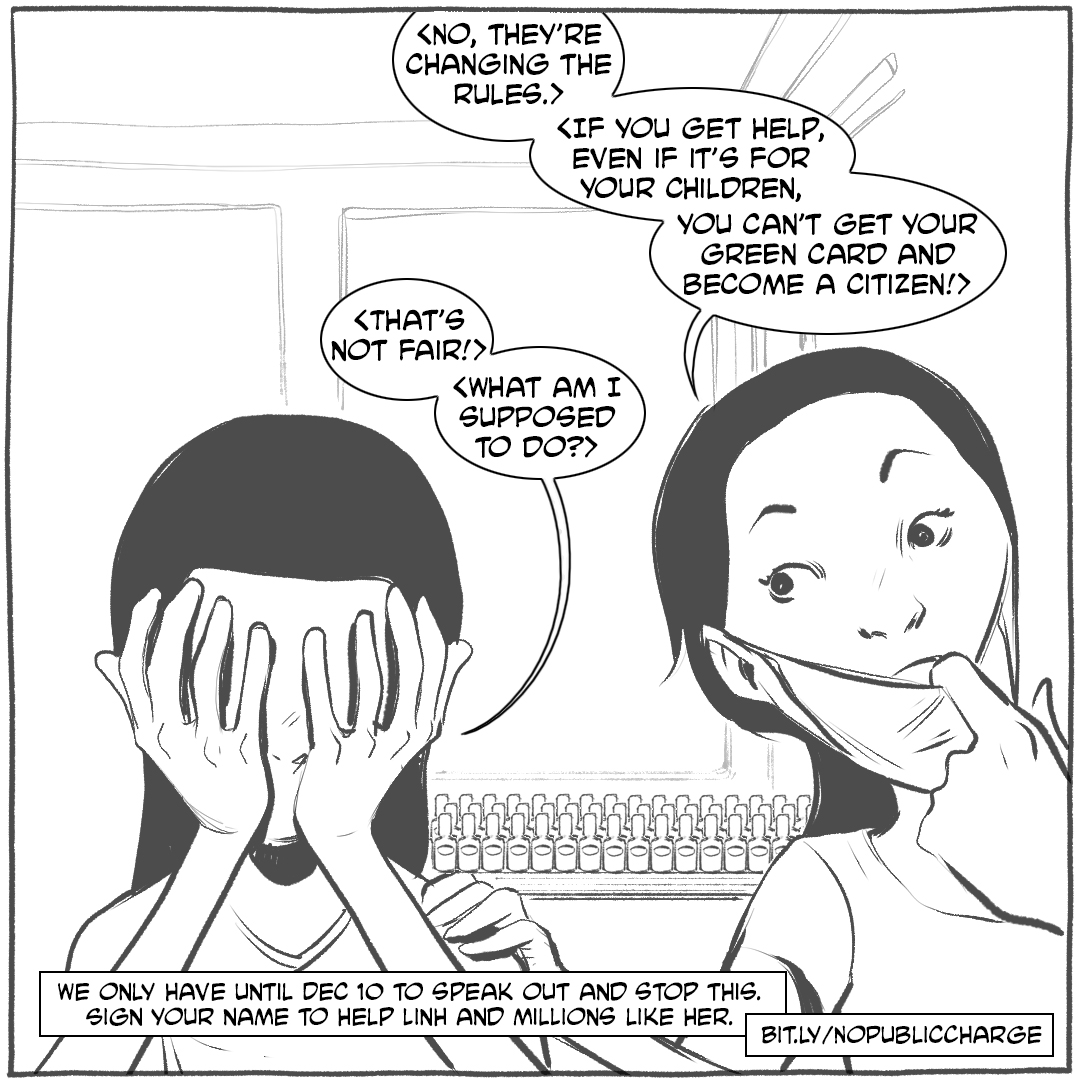 Trump’s Department of Homeland Security (DHS) wants to use public assistance programs as a cover to deny immigrants from entering the U.S. or obtaining their green card.

Everyone should have access to help when they need it. Tell DHS you reject the public charge rule change because families belong together, not torn apart.

DHS has proposed to drastically expand the list of public assistance programs to include those like SNAP, Medicaid, and housing assistance to count against applicants for permanent residency. This would allow DHS to deny a green card for anyone who applies for or uses a public benefit, even on behalf of a family member.

This policy was developed by Stephen Miller, the same person who authored Trump’s Muslim Ban and pushed for family separation at the border. It is an escalated attack by the Trump Administration to slash immigration, punish poor, working class and middle class families, and disempower our communities from seeking essential services they qualify for and need.

With only a week left to tell DHS that this rule change is cruel and immoral, 18MillionRising.org teamed up with Keith Chow and Glenn Urieta, of Asian American comic fame, to create two webcomics to help explain how this “public charge” rule change has real impacts on families in our communities.

Linh is a Vietnamese single mom working as a nail technician to support her two sons. She’s making $25,975, less than 125% of the poverty line for her family of three. This is a common reality in the nail salon industry, where 78% of nail salon employees are low wage workers, earning less than $13.46 an hour. Linh wants to use SNAP to provide fresh food for her sons, but with DHS’s proposed changes to public charge, both her income level and applying for SNAP would count against her in her residency application.1

Davesh, is a Bengali dad who works at a bodega for 15 hours a day and earns less than $31,375 a year. With rising rents in their gentrifying neighborhood, he and his family have been living in a crowded one-bedroom apartment, but are on the waitlist for Section 8 Housing. With the proposed DHS changes to public charge regulations, his low-income and need for housing would prevent he and his wife from getting their green cards.

If DHS makes this change, families like Linh’s and Davesh’s will be forced to make heart wrenching decisions between putting food on the table and staying healthy or giving up their ability to stay together in this country.

Can you take 30 seconds to tell Trump and DHS to stop this attack on immigrant families?

Asian American and Pacific Islanders, like other low-income immigrant families, use these programs to lift ourselves out of poverty. We are already experiencing the largest wealth gap among all racial groups. This cruel change by the Trump administration would potentially deny green cards to tens of thousands of people who are eligible under current rules and affect the lives of up to 20 million immigrants and their families.

31% of all new green card recipients are from Asian and Pacific Island nations. This move is cruel and would be disastrous for all of our families and communities. But, we have until Dec. 10th to rollback this rule change.

DHS needs to hear from millions of folks like you that this change is immoral and irresponsible. Send your comment today.

Keith Chow is the founder of The Nerds of Color and host of the podcasts Hard NOC Life and Southern Fried Asian. He is also a co-editor of several graphic novel anthologies, including Secret Identities, Shattered, New Frontiers, and Ricanstruction. Find him at @the_real_chow.