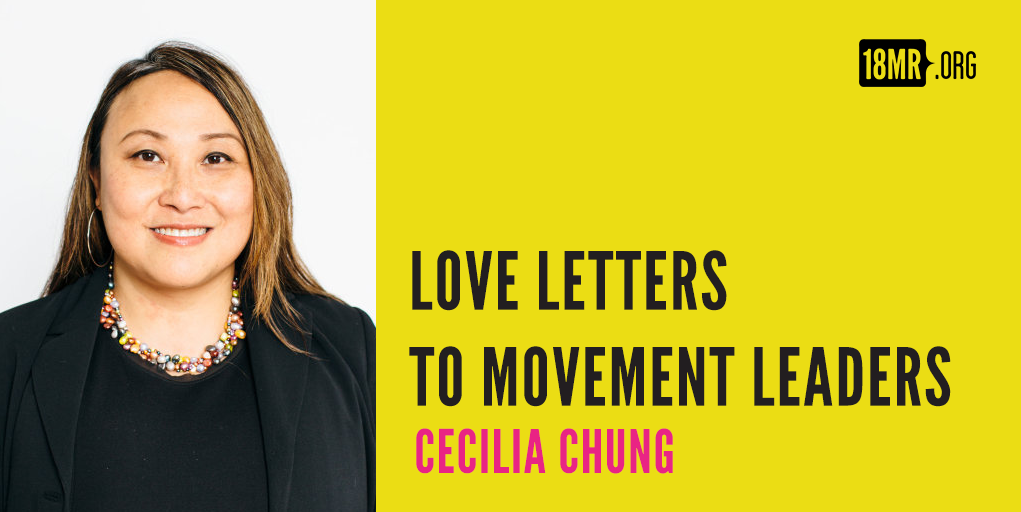 You have spent decades fighting for rights and protections for transgender people and people living with HIV/AIDS. You are an inspiration for younger generations of trans activists. You are tough as nails and a tireless advocate for marginalized communities. This Love Letter is dedicated to you, Cecilia, in gratitude for all of your work.

As a young Asian American trans person, I struggled to find role models. So often in mainstream media, trans women and trans women of color, in particular, are portrayed as victims, jokes, or evil doers. I was hungry for positive representations of who trans people could be: leaders, survivors, unapologetically out and proud advocates.

After coming out as trans, you experienced job discrimination, violence, and homelessness. As an Asian immigrant trans woman with HIV, you have witnessed first-hand how transphobia and HIV stigma keep people at the margins. You’ve taken these dehumanizing experiences and transformed them into fuel for human and civil rights work.

In 1994, you were a member of San Francisco’s Transgender Discrimination Task Force, which documented pervasive discrimination against trans people in a groundbreaking report. Your work here pushed the city to create many pioneering anti-discrimination policies.

You’ve also worked for UCSF AIDS Health Project as an HIV test counselor and as the HIV program coordinator for the API American Health Forum. You were even appointed to the Presidential Advisory Council on HIV/AIDS under President Obama. Because of your work in public health, my trans loved ones can access live-saving and gender-affirming healthcare in San Francisco.

ABOVE: Cecilia Chung speaking at the San Francisco Women's March in 2018.

Cecilia, throughout your life, you’ve busted through barriers and broken new ground. You’re no stranger to being “the first __” in a number of leadership positions.

In 1998, you joined the Board of Directors of San Francisco’s LGBT Pride Celebration Committee. In 2001, you became the first Asian and first trans woman elected as President of the Board. Major pride events often center white, cis, gay men. Your leadership at SF Pride helped shift who this pride parade could lift up and celebrate.

In 2004, you were one of the founders of San Francisco’s annual Trans March – one of the largest trans gatherings in the entire world. I was 21 when I first attended Trans March. I was emotionally overwhelmed by the lively crowd of proud trans people and supporters. I had never seen so many trans people before and the experience has left a mark on me.

You served as Chair of the San Francisco Human Rights Commission where you advocated for human rights for diverse communities living in the city. You broke barriers here, too, by becoming the first transgender woman and first person living openly with HIV to head the commission.

As a transmasculine person, I know that I don’t face the same risks of violence and discrimination that trans women, and especially trans women of color, face. That’s why I follow leadership from Black, Latinx, and Asian American trans women like you, Cecilia. You have shown me how I can be in solidarity with trans women and femmes who are marginalized in housing, healthcare, policing, and more.

Thank you for working to end discrimination and violence in San Francisco and around the US. You have made the world a safer and more just place for myself, my loved ones, and trans and HIV+ communities.

Thank you for living your truth and being an advocate for all of us, Cecilia.